iOS 6 brought a great new accessibility feature that's actually pretty handy for general use. The feature, called "Assistive Touch" can be enabled in Settings.app > general > accessibility. When this feature is enabled, a small dot-like button is overlayed on the screen, and can be moved and docked on any screen edge. Oddly, it doesn't appear in device screenshots. 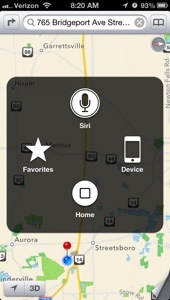 Opening the menu by tapping the dot shows this menu. Selecting favorites shows one default: pinch. 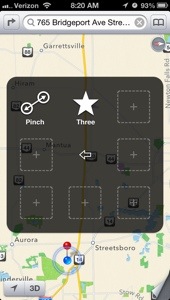 Trying this out in maps places a blue overlay line with an arrow at each end. Oddly, this doesn't show in screenshots either.

What's great about this is that you can now pinch-to-zoom and plane-rotate the maps, with just a thumb - still holding your phone with one hand.