Lots of people comment about how ridiculous it is that we hesitate before or even completely refuse to spend a few bucks on an app, especially when compared to spending the same amount daily for coffee, or hundreds of times more for the smartphone, tablet, or PC that the app is running on (obligatory Oatmeal link). 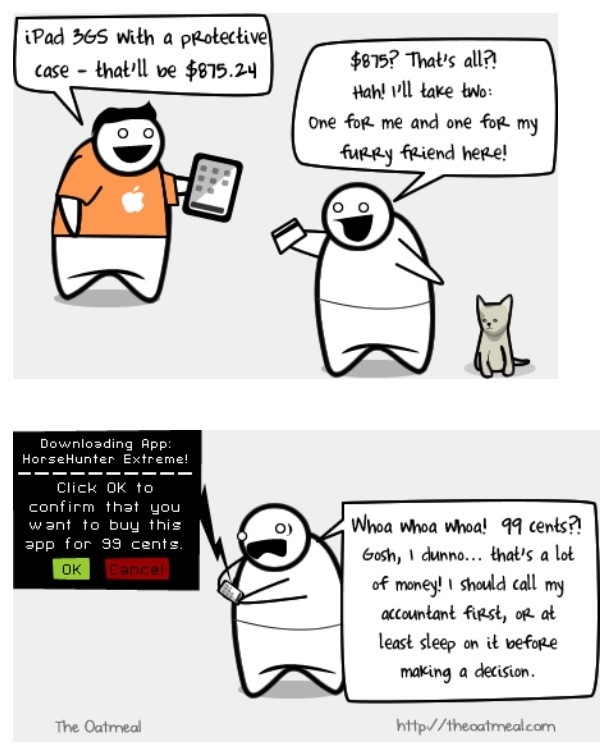 While straight up refusal to pay for quality software is silly, I don't think hesitating is ridiculous or weird at all, and here's why:

People have been conditioned (for better or worse) for many years that paying for software is either rare, or crazy. The only reason you'd pay for software is if it's a high-profile package or game from a reputable company. Something like a video game on disk or cartridge, or a PC operating system or package like Windows or Microsoft Office would be worth shelling out some cash, but it's rare and expensive. You wouldn't pay for a small flash game played in your browser. You wouldn't pay for a site like Facebook, or yahoo games. Even Windows applications like WinZip or other shareware utilities are rarely purchased because there are usually free alternatives.

So now, all of a sudden, smartphones created a whole new platform for software. Games, productivity apps, utilities, and endless other categories of apps are available to users. Many of them cost money, but there are still usually free alternatives. Paying for apps is a new paradigm of purchase. People know that coffee and phones and computers cost money, because they can hold them or consume them, and treasure them. But the average person is so far removed from understanding the complexities and costs of developing and producing software, that when combined with the years of conditioning that software is free, people feel hesitant to pay for software.

Luckily this isn't everyone and people are undeniably buying apps and software, creating a huge economic market for mobile app development.

My point is that it's not weird for people to hesitate before buying a $5 app. In fact, it's a good thing – if it encourages informed decision making and real thought about the value of software.